Roma have a fantastic home record and only conceded 2 goals at home all season as well with only 1 draw and 0 loses, Napoli are going through a slight rough patch with only 1 win in last 4 games but in general have a decent away record and a very dangerous side going forward. Both teams are taking this competition seriously and expected to play full strength sides with Roma players also been the fresher as there game on sunday was abandoned after only a few minutes.

Roma - at home romas highest rated player is De Rossi with a average of 7.96 he has no goals or assits or HRP awards either, apart from goals hes a all rounder with good stats across the board been up there on interceptions tackles blocks has the most passes per game by a fair amount and good areal duals won too but seems to be that player that always is consistent but just cant do enough at times to grab the HRP. 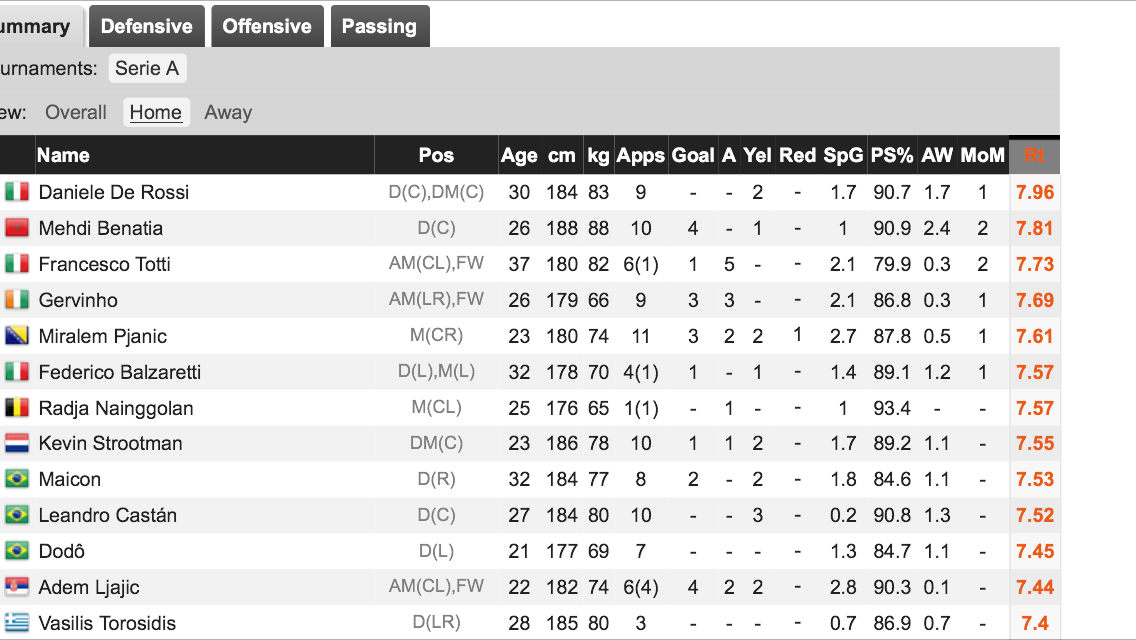 Benatia and Totti are the next 2 highest rated players and jointly won most HRP at home with 2 each and surpisingly totti only has 1 goal but 5 assists tho and benatia the defender 3 home goals, Benatia has all the attributes that you want in a defender has the most averages for areal duals won intercetions blocked shots and clearances and a good average for tackles, Totti averages a big 4.1 key passes a game and as stated before has 5 assists in 6 home games.

Gervinho to the surprise of us Brits has been outstanding so far for Roma and has 3 goals and 3 home assists with a average of 7.69 and the highest average dribbles with 2.3 per home game, this has earnt him 1 HRP award at home so far.

Stootman has lots of good attributes with goals and assists mainly coming away from home and provides 1.9 key passes a game and is free kick taker majority of the time.

Pjanic very similar has very good stats across the board and has 3 home goals and 2 assists to his name inc 1 HRP and a rating of 7.61 2.2 key passes and 1.5 dribbles a game.

The Roma team is very good on stats and as you can see by their midfield is hard to break down they only concede a average of 9 shots a game 3 of those blocked and only conceded 1 shot on target in the last 4 home games inc a game v juve. 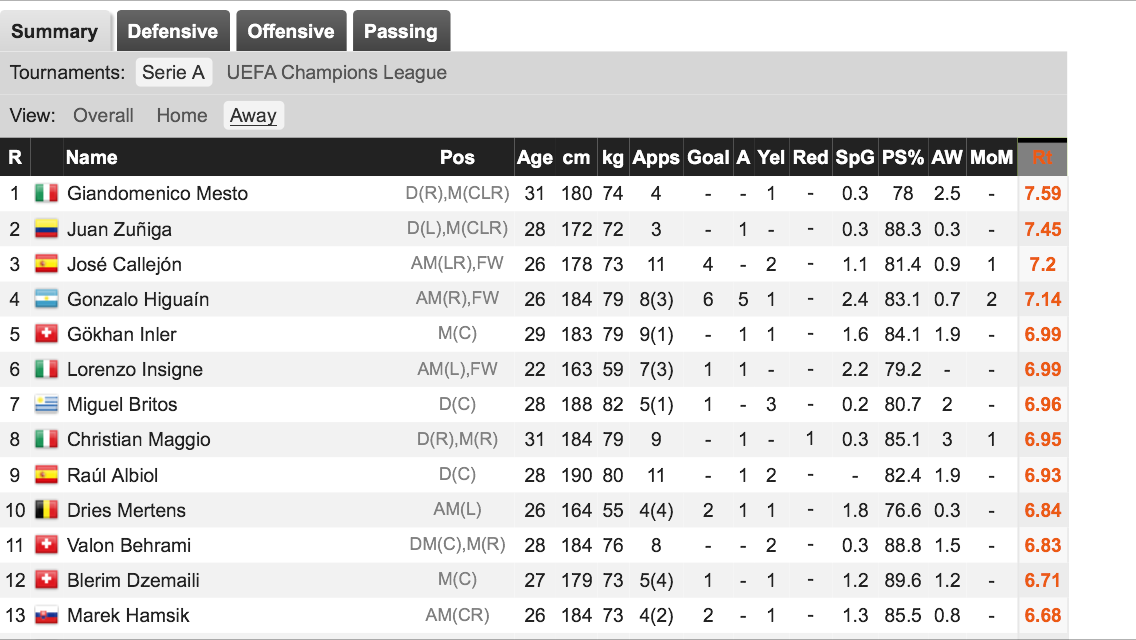 Their players have won 6 HRP awards away from home split between 5 players with only Higuain getting more than 1, he has 6 goals and 5 assists and a rating of 7.14 but apart from his goals and assists nothing really stands out about his stats, am not saying there bad stats but hes not in the top 5 or so apart from shots taken which you expect from a forward his rating seems solely dependent on goals and assists.

Callejon is the highest rated player with 7.2 and 1 HRP in away games he has 4 goals and a good tackle average of 2.3 for a attacking player a decent key pass average but no away assists to his name .

Mertens has been a very important player for them recently with 4 goals in his last 6 starts 1 assist and 1 HRP and is taking lots of long shots lately which napoli could be restricted to.

Napoli havent got the greatest defence but the 2 defensive minded mids have good averages in tackles interecptons clearances to give support to the weaker part of he team, Inler Behrami or Dzemaili will be fighting for the 2 pos there.

The other thing to mention for Napoli is the right back position 3 out of the top 8 rated for Napoli have been the right back with Maggio the only fit 1 at the min and already got 1 HRP which was away and a rating of 6.95 and the best areal duals won with a average of 3 per game. 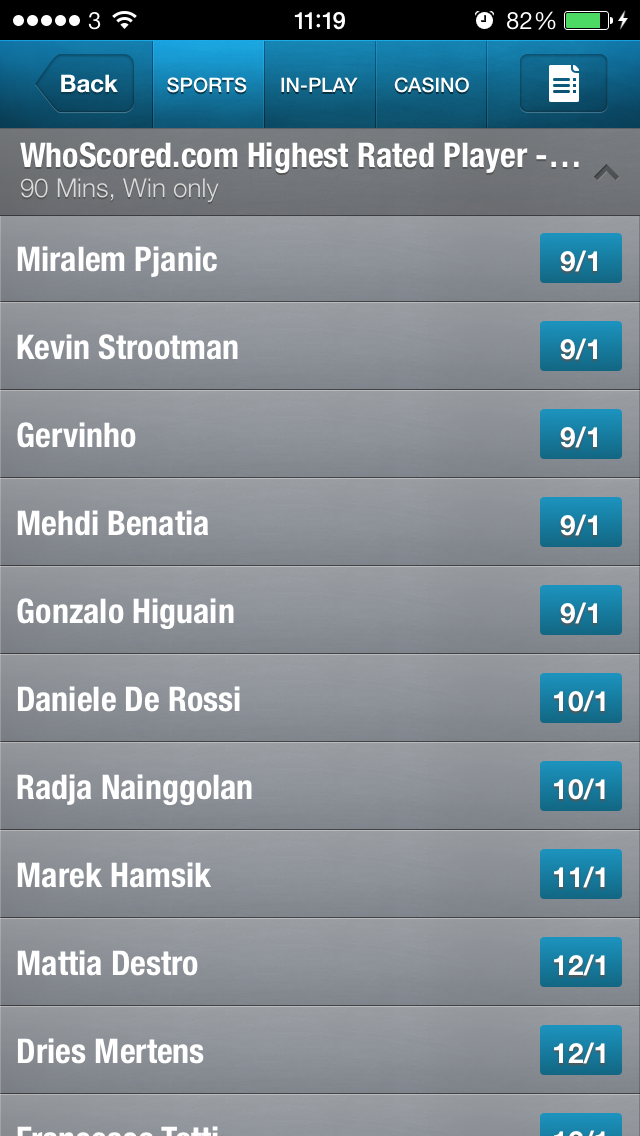 Looking at the odds on Bet victor rightly so this is a wide open choice for Highest rated in which you can give good reasons for at least 8 or so players. With Romas home record if they can keep it up would expect it to be really hard for a Napoli player to win but as stated before just because a player isnt on the winning team doesnt mean they cant win HRP, tackles clearances and areal duals could play just as bigger part as goals and assists. Napoli need to attack to stand a chance cos they cant rely on their defence to hold out and conceding 3 in the last game shows this.

I think Roma will win and more than likely win to 0 Higuain Callejon Mertens and Insinge are very dangerous but this Roma team are so hard working at home and if they can limit Juve to no shots on target could do the same here. Gervinho has been so dangerous going forward lately and could be the person to unlock the Napoli defence but in more of a creative role than scorer.

All the highest rated odds are at bet victor with the stats at whoscored.com and can watch them live in play.

Oops, you forgot something.

The words you entered did not match the given text. Please try again.